The Network Health selection is located within the Diagnostics section and can help a network administrator quickly review the overall performance of a network. From this area, you will be able to view interface status, IPSEC VPN status, perform a traceroute, perform a ping, view bandwidth and latency performance, view ISP Outage Information as well as SLA (Service Level Agreement), and setup an Intensive 48-Hour Latency Test. The 48-Hour Latency Test is a useful tool to help network administrators identify consistent packet loss or high-latency issues. Due to the extensive explanation, the 48-Hour Latency Test will have its own section. The format may be different if you are using lower firmware version but the content is still the same. The only difference is the visual diagram.

The Interface Status menu shows the interfaces on the back of the SimpleWAN (WAN, LAN, and OPT) and their corresponding information. It will show whether the interface is active or not, as well as the IP, duplex of the interface, and the last known ISP.

Here is an example if the connection is down:

If there are any VPN tunnels created on the site, their connection status will be displayed here. It will be separated via IPSEC, VMPLS, and SDV.

A traceroute is a network diagnostic tool for displaying the route to a particular IP and measuring transit delays of packets across the Internet. A traceroute records the round-trip times of the packets received from each successive host in the route to the end destination; the sum of the mean times in each hop indicate the total time spent to establish the connection. Our traceroute tool will show you hops from the site and from our servers. You may also place your own custom destination into the traceroute tool.

The ping tool acts as a node on the network to ping out from to see whether or not a device behind the router should be able to access the Internet. Here we can see one DNS service being much faster than the other.

This section shows the Download/Upload Bandwidth of this site for the past day and the past 30 days. 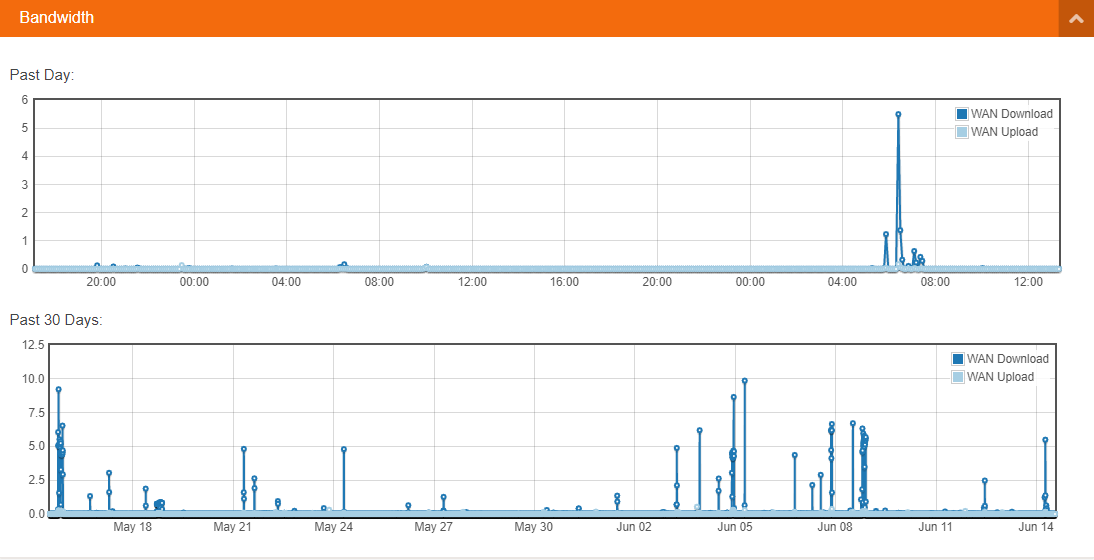 This section shows the Latency for the past day and the past 30 days. On a stable connection with sufficient bandwidth and minimal latency, VoIP systems typically have a minimum of 20 ms inherent latency and target 150 ms as a maximum latency for general consumer use. With end-to-end QoS managed and assured rate connections, latency can be reduced to analogue PSTN/POTS levels. Latency is a larger consideration in these systems when an echo is present. 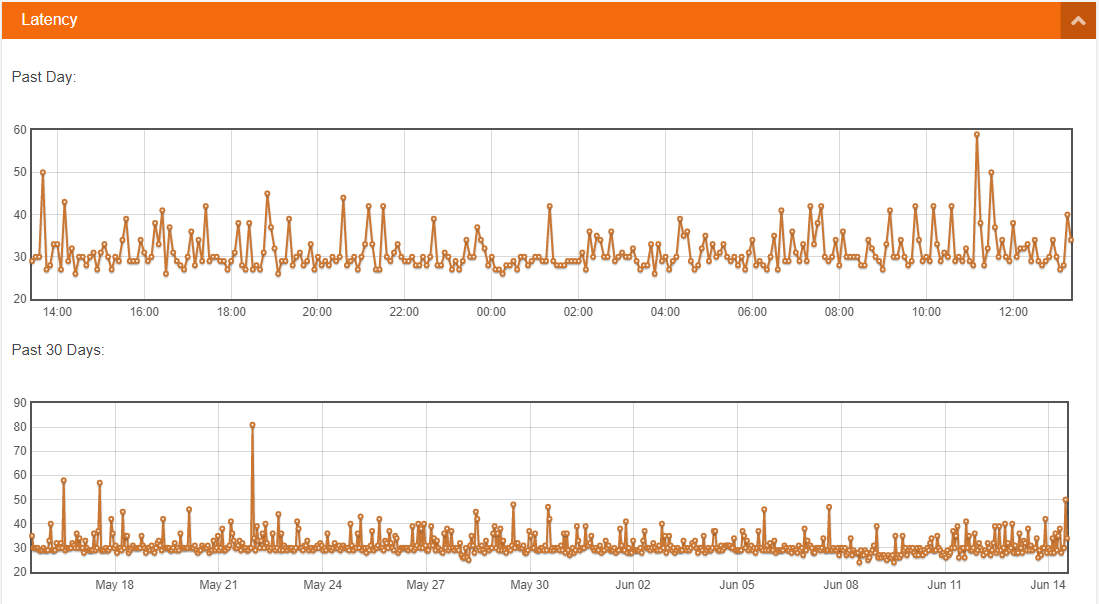 This just links directly to downdetector (3rd party, in no way affiliated with SimpleWAN) to view ISP outages in the area. It may be beneficial to also view our ISP Outage History tool as well.

This page will show the ISP outage history of the ISP in use at this site in a given state. It will show a 15 day moving average line (black line), as well as the percent of sites that are unreachable (represented by an orange line).

ISP SLA (Service Level Agreement) is a percentage value shown on the Site page, and is the number of successful communication attempts out of the total number of attempts during the past 30 days.

If a site is having latency and connection issues, the 48 hour latency test is a great way to view these issues over a longer period of time through intensive testing of the connection. The test runs 10 ICMP pings every 30 seconds to our test server to verify a connection is present and how long it takes to reach our server, if it reaches it. The data from this test is deleted after 72 hours, so be sure to check the data within that time-frame! Also, it should cause no degradation in service, so please use it when necessary without worry!

The 48 hour latency test can be found by navigating to Diagnostics on the site overview side panel navigation pane, and then by clicking Network Health under the expanded option set (as seen below),

Then go ahead and scroll to the very bottom of the screen and activate the 48 hour latency test!

Let’s explain what can be expected on the graph:

There are three sections to the graph: the last 3 hours, the last 24 hours, and the last 48 hours. Along the Y-axis, the length of time in milliseconds that the pings took can be seen. Along the X-axis, the time (in UTC) can be seen where the pings were made. 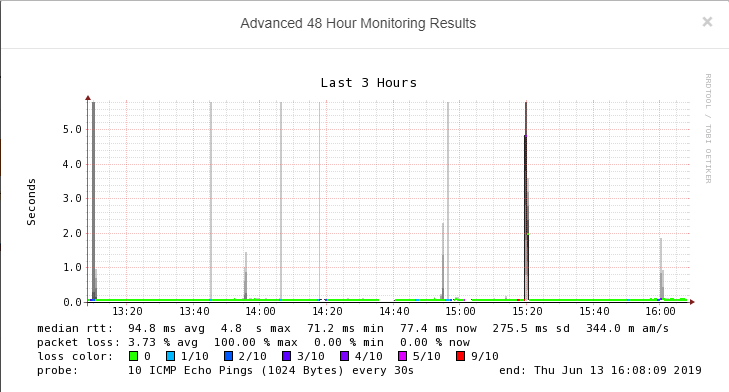